Some improvements to the original design.

This new design addresses many of the flaws of the original design. It is larger and holds more compost allowing the increased mass to hold on to heat better and thus speeding the composting process. Also, the plywood construction is sturdier and the pure cylindrical shape theoretically would allow the drum to roll more easily. 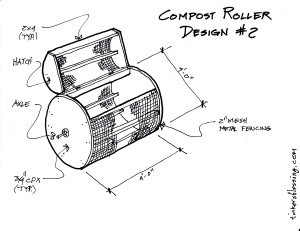 A view of the plywood frame:

As with virtually all of my projects, there were unexpected design issues that cropped up. First, the idea of a hinged hatch opening proved unworkable. Not only were the hinges I used too small, but with the hatch open, the drum no longer rolled – duh – meaning all the heavy compost remaining in the drum had to be removed by hand. I resolved to remove the hinges and simply go with a removable hatch.

Second and more importantly, when full, the drum composter is VERY heavy: much more so than I had anticipated. And while the drum rolled easily across the field when it was empty, when I finally got it full, the weight of the drum caused it to sink into the soft sandy soil in my pasture. The result was, it was impossible to roll.

my patchwork solution here was to make a makeshift track out of scrap lumber for the drum to roll back and forth on. The final assembly looks like this:

This second design is a huge improvement over the original. It is still low tech and easy to build. Rolling the drum is easy and can be done by one person. The compost is aerated without having to turn it by hand using a pitchfork, (or without using fossil fuels) And the increased mass allows for heated decomposition to take place resulting in better compost in a shorter amount of time. (Win x 4?)

One thought on “A Better Composting Drum”