Need winter storage for potatoes but don’t have a ton of money? Try this method.

I’ve had a storage problem for several years. Despite my efforts to plan out my harvest, crops like potatoes and apples always seem to ripen all at once leaving me with bags of fruit and spuds and nowhere to put them.

When I was young in New England we had a concrete walk in root cellar. While I don’t recall us ever using it for storage I do remember the cool moist environment on even the hottest summer day.

The cost of making a huge root cellar was prohibitive. However, after perusing several Youtube videos on low cost in ground cold storage I thought I’d have a hack at it. I quickly realized that while it is not difficult to do, there is a trick to utilizing the mass of the earth to keep produce cool and fresh for several months after harvest. The trick is air circulation.

By adding two pipes, one for cool air intake at the bottom and one at the top for warm air to escape, air circulation can be achieved without the need for fans. Th constant fresh air allows the sound ( or apples or carrots,) to stay cool and moist without rotting. (That’s the theory anyway.)

A two and a half foot deep hole and voila, instant root cellar. 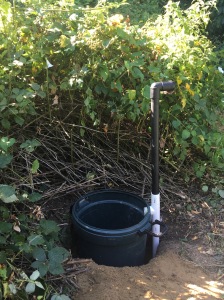 Having just made it I don’t know if it will ultimately be successful or not. But after backfilling the hole and measuring the temperature I had 90 degrees Fahrenheit outside in the sun and 62 degrees F inside. Not optimal. (50 degrees would be better.) but almost thirty degree difference on a really hot day is pretty remarkable.

Add in the fact that I used a broken plastic garbage can, some surplus PVC pipe, and an old bottle of Gorrilla Glue and you have the ultimate tinkerer’s project. Simple, quick to construct, and CHEAP. Win, Win, Win!

Final note: One thing I added to this design was painting the vent stack matte black. This is to promote circulation by creating a “solar chimney”. The theory is by using the sun to heat the upper stack, the air inside will rise drawing cold air in the lower tube. This cooling technique works well in hot climates. I do not know if it will function as well in a cooler climate or at this small a scale but I thought it would be fun to try out.