A simple design for a backyard biochar stove that anyone can build.

Biochar is something of a trendy topic these days. Despite being used for centuries, it has recently been rediscovered by many in the agricultural community. At it’s most basic, biochar is quite simply charcoal that has been infused with nutrients, micro-organisms and moisture. When turned into soil biochar is a dynamite soil amendment that can help turn the most lifeless soil into a living medium in which plants will thrive.

I have long desired to try using biochar in my garden but was hampered by the cost and unavailability of the substance. Thus I began to experiment with different designs that would enable me to make biochar at home. The following is the result of at least a dozen prototypes. Some ideas I got off the internet. Some came out of my rather small and unreliable brain (mostly at three in the morning). But as always, the design follows my three basic criteria: Simple, Easy to build, and Inexpensive.

The design of this stove is simplicity itself. As with the smaller prototype I posted earlier it has two metal containers, one nested inside the other, with a tall vent stack. Air enters through holes in the outer container and travels upward in between the two barrels to enter the inner chamber at the top. This heated air aids the combustion of the gasses that come off the wood. The hot gasses then travel through a reducer into the vent stack where a large amount of secondary air completes the combustion. A row of small holes around the bottom of the inner barrel aid in air flow. (See Geek’s corner at the bottom of the page for a further discussion of these bottom holes) Lastly, as the outside temperature during my trials has been in the 40’s I added a steel screen around the whole thing to help hold the heat in. 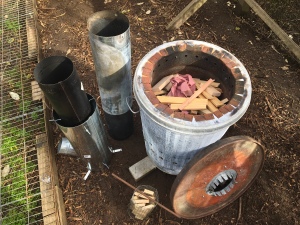 You will note in the photo above a couple of modifications to the original design that improve the efficiency of the stove markedly. The first is to reduce the hole in the top of the stove. Originally, I had the hole diameter as half the diameter of the inner barrel. While this produced adequate combustion to achieve pyrolysis, I found that the smaller hole kept the burning gasses in the stove longer leading to more complete combustion. The second change was to manufacture a double walled vent stack. Early on I found that a secondary source of oxygen added to the vent stack allowed for a much more complete combustion. Going on basic stove design principles that say a hot fire burns more efficiently, I decided to “insulate” the vent stack by adding a second skin. The results of these two changes were amazing. While the first trials of this stove burned at between 600-700 degrees Fahrenheit, With the smaller hole and insulated vent stack, the fire maxed out at over 1000 degrees. (My Harbor Freight infrared thermometer only goes to 1000 degrees.)

With the new modifications the stove burned for over two hours and produced a sizable amount of charcoal. 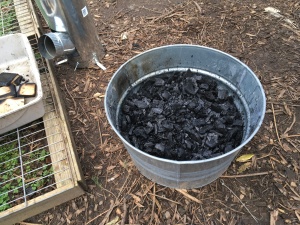 Advantages Of This Design:

The two designs I had used previously to this one were 1. Open Flame Cap Kilns and 2. Nested Barrel Retort Kilns. Both of these designs have limitations. The Flame cap Kiln, while good at processing large amounts of material, has issues with emissions and needs to be constantly fed throughout it’s run. Retorts are much cleaner and don’t require tending, but they require a relatively large amount of fuel that is separate from the material that is to be turned into biochar. And they produce a substantial amount of ash.

This design addresses both of those concerns. Because it is enclosed, the stove doesn’t have to be tended. You only have to light the stove from the top, wait for the fire to really be going then put on the lid and vent stack and walk away. When the flames die out, you simply open the stove, and dump the coals into a tub of water to quench them and you are done. There is no need for a separate source of fuel as the fuel and feed stock are one and the same.

The only real drawbacks of the design are the need for a substantial quantity of water to quench the fire at the end and the need for quite dry wood as a feed stock. I have been using wood that is 10-15% moisture in my trials. Any more than that and the stove produces a great deal of smoke and the fire doesn’t get hot enough to produce good biochar. Finding dry material in the Pacific Northwest can be an issue, particularly in winter. So I am currently working on modifying this design so I can use the heat from the stove to dry enough wood to fill the stove for the next batch.

I am very happy with this design. It does what I intended it to: make a reasonable amount of charcoal simply and cheaply with a minimum amount of effort. I intend to continue tinkering with this design to see if I can’t make it better but as it stands it is a simple design that doesn’t require a huge amount of construction skill or fancy tools and can be built at home by anyone. And it works.

While this stove works very well I have to confess, I’m not entirely certain HOW Or WHY it works. When I started building it I was convinced that the holes at the bottom of the inner barrel functioned to suck wood gas out that would mix with the fresh primary air and combust at the top of the burn chamber. Now I am not so certain this is entirely the case. As the stove depends solely on the vent stack to pull the air through the system, it is probable that these bottom holes pull in some of the primary air from the outside holes, at least at the start of the burn cycle. I suspect that wood gas is only sucked out of the bottom holes during the later stages of the burn when the heat from combustion moves down the barrel. Thus, though I have kept the term “Gasification” in the title, I suspect this stove is not a true gasification stove but something of a hybrid.

I am also uncertain exactly how clean this stove burns. While the exhaust coming from the vent stack appears very clean during a majority of the burn, to date, I have not had the chance to able to test the emissions for either particulates or Carbon Monoxide. Something I hope to do in the future.