An experiment to see if adding a solar heat collector to the small composter can raise the temperature inside the composting drum and “jump start” the thermophilic bacterial decomposition process.

In the previous post I postulated that by insulating a small container and passively drawing air through the compost inside, I could achieve thermophilic bacterial decomposition without the need for a massive compost pile to hold in the heat.

While the experiment did work and compost was produced, the temperatures in the pile did not rise to the levels I was seeking. (140-160 degrees F) Thus, I will continue tinkering to see if I can reach these temperatures.

Thus by forcing warm air into the container I hope to improve the decomposition process by increasing the flow of oxygen to the material inside the container.

To begin, I constructed a simple Screen solar heat collector. A screen solar collector is basically a simple box, painted black inside and covered with a sheet of glazing. I got the plans for this device from the internet. The sun strikes the black interior causing it to heat up whereupon you can pipe the hot air inside the box into whatever container or building you wish to heat.

Initially I had thought to simply let the air pressure from the expanding hot air force the hot air into the container but the more I looked at the arrangement the more I doubted that this would work. I had a 12 volt battery and a 12volt vent fan left over from a previous greenhouse project so I installed them in the tube from the collector.

unfortunately, the battery didn’t seem to be as charged as I thought. So I added on a solar panel (also from the greenhouse project.)

Interestingly, the fan worked well at first. Too well it seems. For, the volume of air it moved through the conduit was great enough to lower the temperature in the collector several degrees. Thus, the velocity of the air was too great for the sun to have a chance to heat the air in the collector.

Ultimately, the solar voltage regulator didn’t appear to be working properly so In the end I had to turn the fan off and rely on passive transfer of hot air after all. 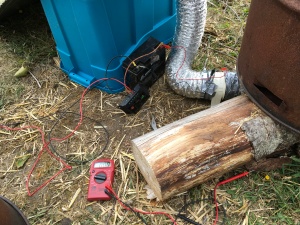 But eventually, after the sun came out, the temperature inside the barrel hit 100 degrees Fahrenheit. So passive heat transfer does work, albeit very slowly.

The idea of facilitating the decomposition process by the addition of warm air, I feel, has promise. The technology of solar collectors is simple and well established. However, the necessity of active air circulation to make the system work adds a level of complexity that, I feel, is somewhat problematic.

The famed “Murphy’s Law” which states “anything that can go wrong, will go wrong” I have found has a corollary which goes roughly “the more complex the piece of machinery, the more opportunities for Murphy’s Law to apply.

I still think the idea of adding warm air to the compost container has merit. However, in future experiments I will be working on designs which do not rely on mechanical air circulation methods but instead focus on improving the efficiency of the passive air circulation. Specifically, I plan to build a solar heat collector underneath the composter so that the heat generated from the collector can simply rise into the compost container.