The temperature data looks promising.While I’m not ready to declare the hoop house experiment a total success – it’s only been a week since I finished it – I am encouraged by the data so far.

To recap, this project grew out of frustration with the small poly tunnel or “hoop house” I constructed to extend my growing season. Despite my best efforts at ventilation, on sunny days, inside the hoop house registered a full 30 degrees hotter than the outside temp. Then at night the temperature dropped precipitously to what ever the outside temp was. The result was that the temperature swings inside were often so drastic that my plants were more stressed out than if I’d simply planted them outside with row covers.

I began to research to see if I could retrofit my hoop house to perform better in the spring and fall. The most promising idea I found were several farmers who had added a second layer of plastic to their hoop houses. This second layer was inflated and separated from the first by means of blowers. This added a layer of insulating air to hold heat in and buffer temperature swings.

in addition, it became clear that I needed more thermal mass in the hoop house. I had added three 55 gallon plastic drums but it was obvious I needed more to stabilize the temperature.

I was unhappy with the blower idea for separating the plastic as it required a source of electricity. As hoop houses are often found some distance from houses, electricity is sometimes not availeable. Then there is the problem of what to do when the power goes out.

In the end, I decided to simply replicate the welded wire armature and build a second greenhouse over the first. Thus I literally built two greenhouses, one inside the other.

I then added about 100 gallons of water – in black milk jugs – and two layers of terra-cotta tiles to serve as work space. 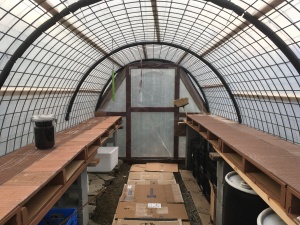 After one miserable cold rainy week the data I collected was as follows:

Thus the average temperature was 6.7 degrees warmer inside the hoop house.

Even more promising for me, the inside morning temperature at sunrise was always at least two degrees warmer than outside meaning that the hoop house had retained at least some of the heat it had gained from the sun the day before.

while two degrees might not sound like much, to a seedling, the difference between 32 degrees (freezing) and 34 degrees can be huge.

As I said, while I have yet to see how the hoop house performs under more extreme conditions – like an unseasonal week of freezing temps or a week of bright sun – the fact that I have achieved stable inside temperature and warmer temperatures in the morning even after a night time temp in the thirties is very encouraging.

I would have to say this project was a worthwhile experiment. While the cost was literally double what the first hoop house cost, it still wasn’t that expensive given that many of the materials for the retrofit – like that of the original structure – were salvaged from other projects.

The amount of work involved in retro fitting the hoop house, however, was considerable. I literally had to deconstruct the original structure and then build two in its place. Thus in terms of time it was not truly cost effective.

In conclusion, were I to build another such structure dedicated to growing plants in cold or hot weather, I think I would build a single structure that would incorporate insulation and thermal mass as part of the structure rather than having to retro fit it.